“In the US it has to be 100% according to their protocol and with the support of Chemeter I can also comply 100%.” 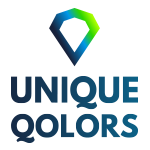 Unique Qolors is specialized in the production and supply of compounds and masterbatches for the plastics processing industry. The company distinguishes itself in the market because it can supply compounds and masterbatches for different types of plastic in exactly the same color. This makes Unique Qolors unique, at least in the Netherlands. Owner Tim van Schijndel: “We can supply the ‘flower pot market’, but also for technical raw materials. For example, if Coca-Cola wants its PET bottles to be red or blue, we can make that for them. Not many other companies can do that. Look, if you ask other companies to produce a certain color based on a RAL fan, they can undoubtedly do so. With excellent quality. But we can achieve exactly the same color on PET, PETG, PBT, PE, PP, HDPE, PS, SAN, ABS, PMMA, you name it. The exact same color! That is truly unique. “

Some time ago, a large and important Dutch customer started production in the United States. And to fully guarantee their quality there, Unique Qolors was asked to supply the raw materials. To do this, these substances must be exported to the US, so according to GHS legislation. In practice, this turned out to be a major obstacle for Unique Qolors. Van Schijndel: “All in all, it took me six days over a period of four weeks to make one MSDS. That has been sent back and forth endlessly because something was missing every time. First, carbon black had to be added and when that was changed, a hazardous sign had to be added, then all H-phrases had to be stated, Californian Proposition, you name it. It was driving you crazy. For me, but also for the people in the US. But with the efforts of Chemeter, that problem was solved in one fell swoop. In less than two hours I have a safety data sheet that is also easily accepted in the US.”

“What I also discovered thanks to Chemeter is that my suppliers have absolutely no knowledge of exports to the US. They say: “You have received a safety data sheet from us. Isn’t that enough? ” Yes, but not if you are exporting to the US. Then that sheet must comply with US legislation. So GHS. In the US it must be 100% according to their protocol. With the support from Chemeter and the support from the US – which is also very good – I can also comply 100%.”

“Yesterday I received the first order from the USA, partly thanks to the software you supplied! Really great!!!”’

Looking for a software solution

After my start in 2018, I soon realized that I needed a software solution for the production of my safety data sheets. I have considered a number of options. In the end I invited two of them for a demo, including the providers of Chemeter. The other party offered a total system, complete with purchasing, sales, you name it. All modules that I have already arranged. With that system you also have to go through a lot of – not always understandable – steps to arrive at a safety data sheet. During the presentation, that seemed to work much, much more simply with Chemeter. And it turns out to be the case in practice. The promises they make during the presentation are also all kept. Finally, with that other solution, I couldn’t generate sheets for the US and that’s what it was all about. That made my choice for Chemeter clear and so far I am super satisfied.

“The installation of the software went reasonably well, but I was happy that I had asked a professional IT person. There were some issues that had nothing to do with Chemeter, but with the fact that I had purchased a new laptop that had been on the shelf at the supplier for quite a long time. We had to run update after update before we could get Chemeter installed. Moreover, I wanted to have everything in the cloud and for that too it is wise to ask an IT professional. But now everything has been installed and I am generating my MSDS documents very easily.”

Due to the coronavirus, it is extremely problematic – if not impossible – to demonstrate our software on site. Therefore, we would like to point out that we can also give you a full online demonstration via Skype, Whereby or similar technique. The content of those online demos is equal to that for a personal visit. Thus, with regard to your safety data sheets, you will be completely ready for the challenges that await you after the corona crisis.

REQUEST THE FREE DEMO WITHOUT ANY FURTHER OBLIGATIONS!